Posted by admin on Thursday, September 13th, 2018 in Dental, Newsletters
no Comment.

One of the best dental investments (and one of the most expensive) I have made is the 3D CAT Scan for the head. This device provides a high-quality 3D rendering of your pertinent dental structures including your sinuses. One of the most important things I can see is the airway. I am amazed at how many patients have a definitive airway problem as seen on their 3D scan or an airway problem that needs further investigation. The 3D Scan has also been a valuable tool for discovering hidden infections such as cavitations or abscesses.

As I have previously written, airway problems can have a profound impact on one’s health. Research has shown that sleep apnea patients have higher incidence of stroke, cardiac events, high BP, diabetes, dementia and much more. To help in assessing patients for this potentially life-threatening problem, when I see a restricted airway or an airway that looks questionable, I have started offering SleepMed (SM) Home Sleep Testing. The SleepMed company is a leader in sleep health and science. Their SM device is a relatively small unit that sits on the forehead as you sleep; thereby allowing you to do a home sleep study. There is also a nasal cannula attached to the unit.   The SM device monitors snoring and its loudness, sleep positions, the number of apnea and hypopnea events as well as O2 levels. This information, gathered while you sleep, along with a questionnaire that you fill out, is sent to SleepMed. The information is fed into a computer and the results are analyzed by a certified sleep physician.  A report is generated that indicates if there is a problem and its severity. If a problem exists there are various avenues of treatment that can be discussed.

When did your sleep disorder start?

You have learned that you have a sleep breathing disorder; is this something that just started? Probably not; it started as a child and that is why I have been intensely studying what signs to look for in children, and what steps can be taken to correct the problem, so that as an adult, there won’t be a problem.

When children have an airway problem there are many potential side effects such as ADD and ADHD, chronic fatigue, bedwetting, low school grades and much more that I have discussed in a Sleep Disordered Breathing in Children. Thus, it is very important that the problems be addressed as early as possible, not only for the present but also for the future.

One way to test your child for a breathing problem 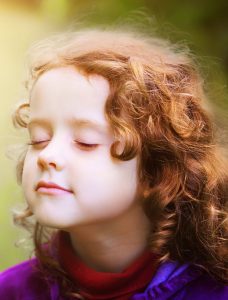 One way to test your child or grandchild to get an idea if there may be a breathing problem is to tell them to keep their lips together and breathe through their nose for two minutes. Time It. If they can’t do this and they have to start breathing through their mouth, it is probably due to an upper airway obstruction due to nasal, sinus, or tonsillar obstruction.

Look down their throat. Are the pharyngeal tonsils enlarged? Sometimes they are so big they almost touch in the middle! Sometimes the pharyngeal tonsils are not bad but the adenoids may be enlarged obstructing the upper airway. If there is an upper airway obstruction, first try no dairy for 30 days. If that doesn’t help seek out the help of a homeopath, naturopath, or an allergist.

If chronic obstruction persists due to enlarged tonsils, have them removed. I never thought I would be in favor of tonsillectomies, but having learned the ramifications of not removing the tonsils on the development one’s airway and orthodontic/midfacial development, I have changed my mind. The tonsils can also can be a focus of infection, causing various systemic problems.  Years ago, I read how Dr. Josef Issels, a German physician who ran a cancer clinic for about 50 years, found that when he removed the tonsils in his cancer patients, his cure rate increased dramatically. In fact, he ended up removing the tonsils in all his cancer patients, even if they were not enlarged, and he found in every case that they were infected! I wonder how many of his patients had a restricted airway due to the tonsils; people with sleep apnea have higher cancer rates. Nobel Laureate, Dr. Otto Warburg, found you can turn any cell cancerous by lowering their 02 level. A common thread?

What should you be looking for in your child or grandchild (that may be an indication of present problems or problems to come).

Here are a few things to observe:

What should you be looking for in an adult?

Look for the same symptoms as above plus a few more:

Parents, you should also note that anxiety, ADD, and ADHD are often a sign of an airway problem. I wonder how may children are needlessly on drugs for these types of problems?

Now that nasal obstructions and tonsils have been addressed, if there is restriction of the lower airway there is almost always going to be a problem with jaw development. This will usually manifest as lack of width in the maxilla (upper jaw) and lack of vertical development (“over closed”). Often the upper jaw has not developed “forward” enough. Addressing these problems orthopedically/orthodontically will usually solve a restricted lower airway and it will also help nasal oxygen intake by proper sinus and mid facial development. Just stretch the skin to the side of your nose a little and see how much easier it is to breathe. You may have seen athletes use breathing strips that do the same thing to help them increase their oxygen levels.

I have noticed that some orthodontists like to wait until all the permanent teeth have erupted into place before beginning treatment; this is a mistake – start early.