Imagine being able to “look” deep within your brain’s cortex, right in our office.

At The NeuroEdge Brain Performance Center we can accurately image the brain and detect abnormal brainwave patterns. One of the most accurate tools to measure the functioning of the brain is an EEG (electroencephalogram). At our Fairfield Connecticut center, we use EEG with sLoreta. This cutting-edge technology called sLoreta has capabilities to measure, in real-time, electrical function deep within the brain’s cortex. By using this advanced EEG sLoreta technology, we can evaluate whether an injury has occurred, as well as whether brainwave patterns associated with metabolic imbalances and overall brain dysregulation are present.

What is an EEG?

An electroencephalogram (EEG) measures the brain’s electrical activity, giving medical professionals a window into brainwave patterns and their balance or imbalance. The NeuroEdge Brain Performance Center uses one of the most sophisticated EEG imaging technologies known as live sLORETA, which can—unlike typical EEGs that show only surface electrical activity—measure electrical patterns deep within the brain’s cortex in real time.

How does an EEG differ from an EKG?

If I had an MRI or a CAT Scan of my brain wouldn’t that show me the same thing as an EEG?

An MRI or a CT scan shows us the structure of the brain, whereas an EEG is a functional image of the brain. If somebody has a frank injury that can be picked up, like a tumor mass or a bleed in the brain, that can be shown in a CT Scan or an MRI, which shows us the structural image of the brain. However, if someone has Attention Deficit Disorder or anxiety or depression, an MRI or CT Scan is going to look normal. With an EEG, we look at the way the brain functions or “talks to itself.” We look at how the different areas of the brain communicate with each other and seek to learn if these different areas of the brain communicate efficiently or communicate in a way that brings the best cognitive function. So, while a CT scan will show that everything is normal in a person with ADHD, an EEG will show that that person has an electrical dysregulation in certain areas of the brain.

The actual recording of the EEG doesn’t differ. In general, when a neurologist or a physician runs an EEG in the hospital, they are usually looking for seizure activity or more pathological abnormalities.  A seizure would show a very large dysregulation. An EEG taken in a hospital is usually not looking for a subtler brain network communication nor are they looking for the subtler aspects of a person’s brain performance, like we do at the NeuroEdge Brain Performance Center.

What happens during a standard surface EEG imaging session?

When we look at a raw EEG, we look at the different brain wave patterns. To record an EEG session, a special soft cap containing electrodes with a conductive 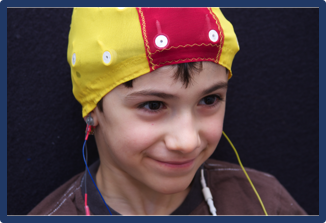 gel will be positioned on your head to read neuronal activity at specific standardized locations. No electricity goes to your head nor will you experience any discomfort. For 10-20 minutes, electrical activity is measured with the patient’s eyes closed and then open. Brainwave patterns differ from eyes open and eyes closed; for instance when your eyes are open your brainwave patterns shift your attention from yourself (eyes closed) to the world around you (eyes open).  On the computer screen, the real-time raw brain waves are displayed, where we look at the frequency (Hz), amplitude (height of the waves) and shapes of the waves. There is always more than one wave being produced at one time!

How do you interpret a standard surface brain EEG imaging?

The brain, with its millions of specialized nerve cells communicates with the body via subtle electrical impulses that travel up and down the spinal column. These electrical impulses initiate everything from thought to movement. Using EEGs, doctors and researchers have been able to “listen in” to these whispers of the brain.  In doing so, there has been established both normal and abnormal brain wave states for various states of consciousness. When thinking of brain waves and states of consciousness, one can use the analogy of a piece of music.

There are many parts, from the bass to the high notes all being played at various pitches and volumes. If the bass or strings are much louder than the other instruments or if they are playing faster or slower than the other instruments, the piece of music might sound off.  The brain is a masterful frequency generator that has different types of “music” or frequency patterns, depending on what function or state of consciousness is needed. What does Frequency or Hertz (Hz) mean?

The brain’s electrical waves are measured in Hertz (Hz) frequency. Hertz is the measure of speed of the brain waves. The number of Hz equals the number of cycles (or waves) per second. One cycle per second equals 1 Hz; two cycles per second equals 2 Hz and so on. There are four basic wave types to understand and these are shown below.

In some conditions, the brain tends to have more Theta waves than it should.  An example of this is Attention Deficit Disorder (ADD/ADHD). Elevated number of Theta waves in the brain of the ADD/ADHD individual would interfere with his ability to focus. Thus, a brain in this state is not unlike a brain that begins to drift off to sleep.  No wonder people with Attention Deficit Disorder have difficulty concentrating!

Different conditions are characterized by different brain wave patterns. For instance, people with certain types of anxiety tend to have higher Beta on the right side of their brain.

What does the height of the waves signify?

We also look at the height of the waves, which is Amplitude. Amplitude signifies the power, or volume of the wave.

What does sLoretta stand for?

sLoretta stands for Standardized Low-Resolution Brain Electromagnetic Tomagraphy. sLoreta is a newer technology in the field of EEG,  that allows one to look at electrical activity from structures that are deeper in the brain.

At The NeuroEdge we have a sophisticated version of sLORETA that allows us to view sLORETA images in real time, this can help us to understand more specifically where the brain may be having dysregulation.

What is a QEEG?

In order to better understand how various brain wave states relate to the statistical norms in the population, a qEEG, or Quantitative EEG is performed. Using the artifact free raw EEG data, special mathematical calculations are made to calculate the average power (amplitude), frequency, and communications between the networks. These are then seen as standard deviations above or below the normative databases based on the age and gender of the patient.This information is displayed using a brain map.

What are Brain Maps?

Quantitative analysis gathered from the qEEG’s are most easily displayed by using a brain map. Brain maps can visually show where a person may have a dysregulation, where the amplitude, height or power of a brain wave is too high or too low, or whether the absolute frequency or speed of the wave, is at a faster or slower range. We are able to look at how certain areas of the brain communicate.

Live Real-Time Brain Mapping shows how the brain functions from moment to moment. Additionally, detailed patient questionnaires, may indeed confirm symptoms or complaints listed in your brain map. For instance, if you indicated you are frequently anxious or worried, your brain map should confirm these wave patterns.

At the NeuroEdge we utilize all the information that is gathered, analyzed and displayed to create a custom treatment plan to help improve brain performance. This may include EEG Neurofeedback Therapy; transcranial magnetic stimulation (Neurotherapy: transcranial electrical and magnetic stimulation for improving neuronal communication and improving blood flow); photo biomodulation (Healing at the speed of light, laser light phototherapy is absorbed by the brain cell’s mitochondria to increase ATP (the energy molecule of the cell), DNA, and RNA synthesis, while decreasing inflammation and quite possibly growing new neurons.); Hyperbaric Oxygen Therapy; Systemic Detoxification; Osteopathic Cranial Manipulations;  as well as nutritional interventions. Naturally, the challenges presented by a stroke patient or someone with a traumatic brain injury (TBI) versus a patient seeking improved focus and concentration are different.