Menu
Home / View all information / BIOMAGNETISM – PART TWO: HOW DOES IT WORK?

BIOMAGNETISM – PART TWO: HOW DOES IT WORK?

Posted by admin on Tuesday, December 10th, 2019 in Newsletters
no Comment. 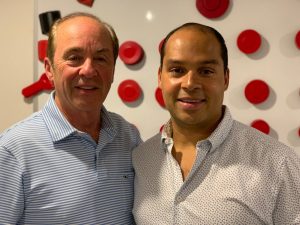 Last month I related my experience attending a Biomagnetism course and how exciting it was. This month I would like to discuss what Biomagnetism therapy is, its origins, and what it can achieve.

In the 1980’s the chief medical doctor for the astronauts, Dr. Richard Broeringmeyer discovered that when the astronauts came back from space, their right leg was shorter than their left leg by approximately ¼ – ¾ inch. This leg discrepancy was not the case before their space journey. As Dr. Broeringmeyer analyzed this strange phenomenon, he concluded that the cause of the leg discrepancy was a result of the astronauts being away from the earth’s magnetic field. Dr. Issac Goiz Duran, a Mexican physician, attended a lecture by Dr. Broeringmeyer. When Dr. Goiz heard about the leg discrepancy and its relationship to a magnetic field, he began thinking in terms of Yin and Yang, and this started his research into “magnetic pairs.” Placing the negative pole of a magnet to a specific point on the body, Dr. Goiz was able to reproduce a shortening of the leg. The application of a positive pole of a magnet to specific points on the body, while leaving the negative pole magnet in place, caused the shortened leg to regain its normal length! This discovery confirmed his hypothesis of magnetic pairs. Dr. Goiz discovered over 200 Biomagnetic Pairs and is considered the father of Biomagnetic Pairing.

Biomagnetism is a therapy that is holistic in approach, perfectly safe, and scientifically based. Biomagnetism restores the body’s homeostasis so that the body can heal itself. Restoring the body’s homeostasis is accomplished by placing magnets of at least 1000-4000 gauss (refrigerator magnets are 50 gausses) on specific points of the body in pairs. One side of the magnet is the positive side, and the other side of the magnet is the negative side. The magnetic field of the applied magnets affects the hydrogen ions and thus the pH in the cells and structures. The effect is to normalize the pH. Why is this important? Health requires a proper pH. Fungi and viruses thrive in an acid pH (less than 6.7), and bacteria and parasites love an alkaline pH (greater than 7.3). Restoring the proper pH creates an inhospitable environment for pathogens as well as improving immune function, reducing inflammation, and creating homeostasis.

What is a Biomagnetic Pair?

Pathogens, as they enter our body gravitate to certain anatomical locations; many of these locations are known to be specific to each pathogen. These associated locations create what Dr. Goiz calls a Biomagnetic Pair. An energetic or vibrational connection exists between the Biomagnetic pairs. One of the pairs is negative, which is alkaline, and the other one of the pairs is positive, or acidic. When the magnet of proper polarity is placed on each point, opposite charges (H+ and OH-) are pushed towards each other, causing neutralization and thus proper pH.

How do We Identify the Biomagnetic Pairs?

A scan is done of the body to identify organs or tissues that are out of normal polarity. This scan is accomplished using a variety of muscle testing known as Applied Kinesiology (AK). AK is usually performed by testing a muscle, for example, the deltoid muscle. Here, the arm is extended out to the side of the body. A base-line resistance to a downward force by the practitioner applied at the forearm is noted. The practitioner is not trying to “overpower” the patient, just noting the resistance to relatively light pressure. The patient is challenged by placing something, for example, a supplement, into their energetic field. If this supplement is not in harmony or does not resonate with the patient, the ability to resist the applied downward pressure on the forearm will decrease. If “in harmony” there will be no change in the ability to resist. Astonishingly, asking a verbal, or even a nonverbal question, will also offer the same testing result.

Sometimes I use AK to test which tooth is giving a patient a problem. When the patient puts their finger on the offending tooth, their muscle will go weak. Usually, when testing for Biomagnetic Pairs, a variation of AK is employed. Instead of applying pressure to individual muscles, the patient lays on a treatment table, and in response to a question a “yes” answer will result in the shortening of one leg. A “no” answer results in no change in leg length. The advantage of this method over traditional AK testing is that you do not have to worry about muscle fatigue or the subjective interpretation of the amount of resistance. One can scan the body from head-to-toe by asking verbally or non-verbally if there is a problem in specific organs or tissues. For example, if there is a problem with the thymus, the body will respond to the inquiry by one leg shortening ¼ to 1 inch or more compared to the other leg. Placing the negative pole of a magnet over the thymus gland will confirm this by noting one leg shorter than the other. One then needs to find the corresponding pair. Some pairs are “known pairs.” For example, Thymus-Rectum is a known pair for the AIDS Virus. If the Thymus-Rectum pair is a suspected pair for the patient, the practitioner can verify this pair. The positive pole of one magnet is placed on the clothing over the rectum area, and if the patient’s feet instantaneously become even, this confirms that this is indeed a correct pair. If the legs do not become even, one must look for a different pairing. Some organs/tissues have one recognized pairing, and some can have multiple pairings. Some patients have what is called Special Pairs, which are unique to the individual, and the practitioner must play detective and look for these Special Pairs. Typically, over three to five visits, as the pathogens are removed and organs, glands, and tissues are allowed to self-heal, fantastic results can be achieved.

In an acute situation, results can sometimes be dramatic.

A patient came in as an emergency visit, complaining of pain in all his upper left teeth into the eye and the left temple. My diagnosis was that the pain was a result of a sinus infection. Placing the proper magnets over two appropriate magnetic pairs resolved the patient’s pain. In just twenty minutes, his pain went from a seven to a zero!

The tremendous potential of Biomagnetic Pair Therapy (BPT), was seen in a study done in Kenya on 13 people who tested positive for S Typhus (typhoid). Typhoid fever is a potentially deadly disease that affects millions around the world. This pilot study was performed to test if a straight forward cookbook application of BPT therapy would be efficacious in the treatment of typhoid. Four pairs known to be associated with typhoid were tested for in each patient as discussed earlier, and the appropriate placement of magnets accomplished. Of the 13 patients, ten patients tested negative for typhoid after 48 hours. However, all 13 reported moderate to significant improvement in symptoms. The three that did not test negative for typhoid after one BPT session had a second BPT session as well as antibiotics. However, given one more day, they may have had negative test results (indeed, this was what occurred in a pilot study on Malaria by Dr. Garica). Imagine the impact in third world countries that this inexpensive, fast, and easily-taught treatment could have! One would only have to learn how to place four or five Biomagnetic Pairs.

What can Biomagnetism Therapy address?

Positive results using Biomagnetism have been reported with almost any disease or glandular dysfunction. From non-life-threatening problems like dandruff to life-threatening cancer, BPT can be helpful. Like homeopathy, BPT can be considered a vibrational therapy. BPT is not harmful and is compatible with all other treatments. I feel that BPT is a targeted modality that can be likened to specific instruments in an orchestra playing their notes. Homeopathy is more global and represents the overall melody. It would seem to me that combining the two will result in a beautiful symphony with all the instruments playing together harmoniously resulting in incredible healing.